We experienced three days of very unusual February weather, when we walked or sat out in the sunshine, before it began to revert to what we have learned to expect of winter months – grey, damp, cold and windy. The temperature in Northumberland was in the high teens and it reached 20ºC in some parts of the UK. We don’t know what this means as far as global warming is concerned but it’s not the first time that we have had glorious warm weather during our Feb/March holiday.

On Thursday I escaped the rain as I wanted to take the opportunity to visit my brother-in-law and sister-in-law, who have recently moved to the north east. There was the added bonus of meeting their new grandson 😍

We left for home on a grey, drizzly Friday. En route, we visited Seaton Delaval Hall which is a grade 1 listed country house near Whitley Bay.

The Delaval family were gifted the land when they arrived with William the Conqueror at the time of the Norman conquest. It passed through the family for many generations with varying degrees of success and failure, wealth and bankruptcy. The family’s wealth came from glass, coal and iron.

In 1728, a fairly modest house was replaced by the existing building which was designed by Sir John Vanbrugh. Unfortunately in 1822 while the family were staying at their other house in Norfolk, the central wing was gutted by a fire which was said to have been caused by birds nesting in the chimneys. The fire spread from the south east wing through to the main central wing, which housed the family’s accommodation. Repairs were attempted at various times but the central wing remains as an empty shell with just the roof replaced. However, even with its fire-blackened walls, damaged statues and lack of ceilings, it is still a magnificent building. In later years, the west wing, which had previously been the servants’ quarters, was used by members of the Delaval family as their family home.

Along the way, one member of the family (John Hussey Delaval 1728-1808) was granted a baronetcy. Due to the rules of primogeniture, the baronetcy and the family seat were eventually inherited by a branch of the family whose name was Astley. (I heard today of a move to stop this outdated (was it ever fair?) rule throughout the aristocracy, as the royals had already abandoned it before any of the Cambridge children were born).

During the 20th century some restoration work of the west wing was completed and eventually the 22nd Baron Hastings, Edward Delaval Henry Astley moved there to live and stayed until his death in 2007.

We were shown around the house by some extremely knowledgeable National Trust volunteers. As we were being told about the 22nd Baron Hastings something clicked in the back of my mind: “My husband knew Lord Hastings”, I said. And so he did! When Richard was Social Work Director of the British Epilepsy Association in the 80s and 90s, Lord Hastings was the Association’s President.

I have a letter which I found when going through my photographs, from Lord Hastings to Richard after he left the British Epilepsy Association.

Lord Hastings said: “You have done a splendid job and it was fraught with difficulties over a long period, but you stuck to it and saw it through some very traumatic situations. It is understandable that you should feel the need of a change but you will be a great loss nevertheless and I’m sure that you will be very much missed by everyone. I wish you the best of luck in your new post and send my warm thanks for your services to BEA. Yours sincerely Hastings”.

The 23rd Baron Hastings, wishing to preserve the future of the Hall and encourage greater public access, entered into discussions with the National Trust and it came into the possession of the Trust in 2009. The buildings have been open to visitors since 2010 and major work is now underway, which is being funded by the Lottery Heritage Fund. The aim is to preserve the fire damaged parts of the building as they stand and to renovate the west wing. In addition, huge works are being carried out right across the grounds in the hope of making this a family friendly destination in years to come. 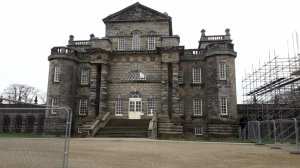