I’m still looking through my boxes of photos and yesterday came across some which Richard and I took when we visited Austria to celebrate our 30th wedding anniversary. There is one photo of a bunch of flowers he had bought me and a card with a big heart on it (I’m sure I’ll have the card somewhere).

I’m glad that Valentine’s Day is over for another year. I find it the hardest day to deal with but I loved finding that photo because, together with some Valentine cards I have found, it reminded me of what we once had together.

So, it’s a while ago since I wrote about meeting Richard, in 1968. We had met in early December, spent the evening talking, eating the meal he had prepared (pork chop, mashed potato and peas) and inhaling a lot of cigarette smoke. And he had asked me out again! I can remember waiting outside the Odeon cinema in Bradford thinking “Well it was nice while it lasted”, before he turned up late, as usual. We ended up going to see a film called “Interlude” about a doomed love affair! I don’t remember anything about it but it had a rather melancholy but hopeful song as its theme

It became “our song” at least for the time being. (The singer was Timi Yuro). We must then have had a long, earnest and esoteric conversation as I returned home to my little flat a day or two later to find a love letter tucked in my letter box. (I still have it, children).

After that, we grew closer – until university closed for the Christmas holidays and he disappeared with his friend to London and a holiday job in HMV.

Richard was in the second year of a degree in social work. He lived with two other students in a maisonette not far from the city centre. One was his partner in deciding to date every girl at the Central Library. He was not happy when Richard met me, or when my friend dumped him after she discovered he was married. I always felt that he resented me and he tried his best to split us up, even while we were planning our wedding. The other student was barely seen.

Children, you are all well aware of the notorious “Satisfaction Guaranteed” T-shirt, worn under a lacy blue shirt! He used to wear that when he was a DJ in the “Gatto Bianco” night club in Bradford. I was only invited there on a couple of occasions. In fact, I wasn’t included in many of his evening outings with the group of friends (mostly students, I think) who went out drinking most nights all over West Yorkshire. We did once visit a club in the Merrion Centre in Leeds. It was after I had passed my driving test and bought a car. I drove about 5 of us over there. It was absolutely neon! I spent the evening chatting to a lovely man (one of Richard’s non-uni friends) who was persona non grata with his family of local industrialists because he was gay. When we left, I quickly realised that I did not know how to make my way out of Leeds in the dark. I was stationary at a traffic lights, unsure which way to turn, when a police car pulled up beside me. I apologised for not moving promptly away when the lights changed. He said “Don’t you think it would be a good idea to put your lights on miss?” I think that was my only brush with the law in nearly 50 years of driving!

Richard had an eclectic taste in music and, while my favourites had moved on from the Beatles to Joan Baez and Bob Dylan, he introduced me to so much more. He bought me a Nina Simone album for my birthday but I also got to know Captain Beefheart, Janis Joplin, The Beach Boys, Hendrix, Leonard Cohen and many more. Unfortunately, Richard’s and his friends’ taste for partying meant that the university didn’t see them very much. Instead of sitting his end of year exams, Richard stayed awake for several days, causing him to collapse and be admitted to the uni health centre. He emerged determined to make a fresh start and opted to change degrees and begin the second year of a degree in economics and geography when the new year started in October.

Although I loved the independence of having my own flat, I had discovered that being in an old Victorian house meant spending a fortune on heating and, besides, the kitchen was damp. So, in early 1969, my best friend from the library and I decided to apply for a flat in one of the new tower blocks being built near Bradford city centre. The flats were mired in the building scandals of the late 1960s, which resulted in a local architect, John Poulson, being jailed for corruption. Completion was also delayed as a result of the collapse of a 22-storey block of flats in London in 1968. Four people were killed and many injured when a gas explosion tore through Ronan Point, causing load-bearing walls to collapse. Eventually, just the first two floors of our flats were declared safe, while the upper 14 floors were strengthened. (The towers were eventually filled, after several months. When we returned to live in the north in 1986 after our sojourn in Berkshire, we were horrified to see that the flats were already boarded up and were demolished soon after).

By the time the flats were ready in the summer of that year, Richard had already proposed and so, it was really the three of us who moved in. (Children, I have spared you the “too much information” that might outrage your sensitivities but I have to say that your father and I were rather ahead of our time and lived together, albeit in secret – my family certainly weren’t aware!). I still feel guilty that my friend moved out and found somewhere else to live, just a few months later as we began to plan our wedding.

We planned to marry in December but eventually decided that we would bring it forward to October. There was no reason not to! I had no parents to plan for me and Richard’s family lived at the other end of the country so we got on and planned it and paid for it. We planned it small! Richard was a regular patron of a Chinese restaurant in the centre of town, so we decided to hold it there, although we stuck to English food. The cost was 6/- (30p) a head! I wanted to be married at a church in the parish where I grew up, rather than my new parish, so had to pretend that I was still resident at my aunt’s in Bingley. My dress was bought in a sale in a Bingley dress-shop. That was half price and cost 18 guineas (£18 18s or £18.90p). My library friend’s father, who was a baker, made our cake.

The day before the wedding we were rushing around decorating the church, delivering the cake to the restaurant and collecting our outfits. It was very fraught and, I think, we were both tempted to call the whole thing off! Still, it went ahead on 4 October 1969. My very tall cousin Alan walked me down the aisle (it’s hard to believe that I used to be scared of him when I was a tiny girl and he was just a teenager). My library friend and an old schoolfriend were bridesmaids and Richard’s brother was best man.

We had already planned for a honeymoon in France at Christmas, visiting my friends, so we went to London for a long weekend. We left on an early evening train (no such thing as evening “do’s”). The weather, which had been beautiful on the day, continued warm over the weekend and we wandered around parks and shops, we ate at a Russian restaurant and we went to hear Jose Feliciano.

And that, children, was the real summer of love, as claimed on the invitation to our 30th wedding anniversary party……………. 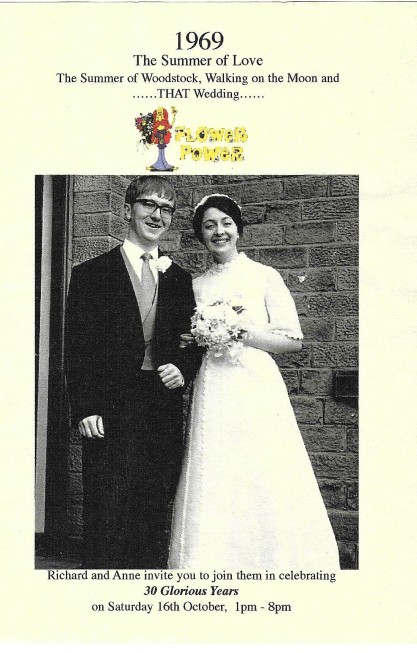