8th June 2006 – Off to Cha-Am
We left Bangkok promptly at 9 am for Cha-am, a district on the Western coast of Thailand about 100 miles to the south. It was a weekday morning so the traffic was still heavy, although thankfully nothing like the nightmare that was previous evening! The city buildings got smaller and changed to very poor looking housing which then disappeared as we reached the countryside. Saga provided yet another guide to accompany me on this journey and she explained a little about the land around us as we went along. We passed salt farms and rice fields. Farmers are able to grow several crops of rice in a year. She pointed to a range of hills to the west of us and said that they marked the border between Thailand and Myanmar and said that the history of Thailand was filled with Burmese invasions.

We arrived at the Cha-Am resort to be met by Kai who would be the Saga Rep for the rest of my stay. It seemed huge resort which I’m not used to and I was going to have to wait until the next day for the conducted tour. Still, I had a lovely large room with a balcony. I found a nearby restaurant (apparently there are several) called the Bua Chompoo and had lunch, then unpacked, had a quick nap, looked at all the visits and activities on offer and filled out a tentative schedule. Then I went out to sample the swimming pool. I remember that it was an unusual shaped pool with lots of vegetation at the far end and, as I noted in my diary, it was “gorgeous” with ” warmish, inviting” water. Happily it was quiet too and so it was very easy to spend the afternoon swimming lazily up and down. I never go on holidays which simply involve sitting around a pool or on the beach but I did always set myself the aim of swimming a few lengths every day whether or not I was going out on a trip. I also visited the beach which was beautiful too and almost deserted.

Later I had a walk around the grounds to find the Sukuna restaurant and then retired ready for the next morning’s team talk.

9th June 2006 – Saga friendliness
Over the years I’ve found that hotels which Saga uses regularly, usually have a lounge where you can go and get teas and coffees, chat to other Saga guests and meet for information about the day’s activities. This is where we had a meet and greet followed by a tour of the complex. Most of my fellow guests are also women like myself, either on their own or in twos. After touring the complex we were taken for a short walk to the local village where they were selling some beautiful clothes. Then it was back for lunch in a third restaurant, this time serving Italian food.

After lunch and a spell by the pool, I was invited by two ladies from the Midlands to join them for a walk along the beach. Now, this is the thing with Saga holidays. In Borneo, although I met some friendly people on the trips this never extended to invitations to share meals or indeed join in any non-trip related activity. In fact, I think I only ate one meal in the hotel when I was not alone. This doesn’t really bother me but sometimes it is nice to be able to sit and chat over a meal – or to have someone invite you to walk along the beach with them. As it happened, these two ladies and I became friends and, although we haven’t met again on holiday, I still exchange Christmas cards with one of them and we update each other on where we have been that year. If I ever arrived on my own in the restaurant, they would always invite me to join them at their table. It was something I really appreciated. Later on we went on some independent outings together.

Tonight we returned to the Bua Chompoo. Their buffet was not just themed night by night but there was food from China, India, Vietnam, Japan and Thailand served each night. It was pleasant to also meet some of the other guests afterwards for a drink in the lobby. This was typical of the friendliness that I became used to on just about all of my subsequent Saga holidays

Then it was time for bed and for looking forward to our first chance to explore. 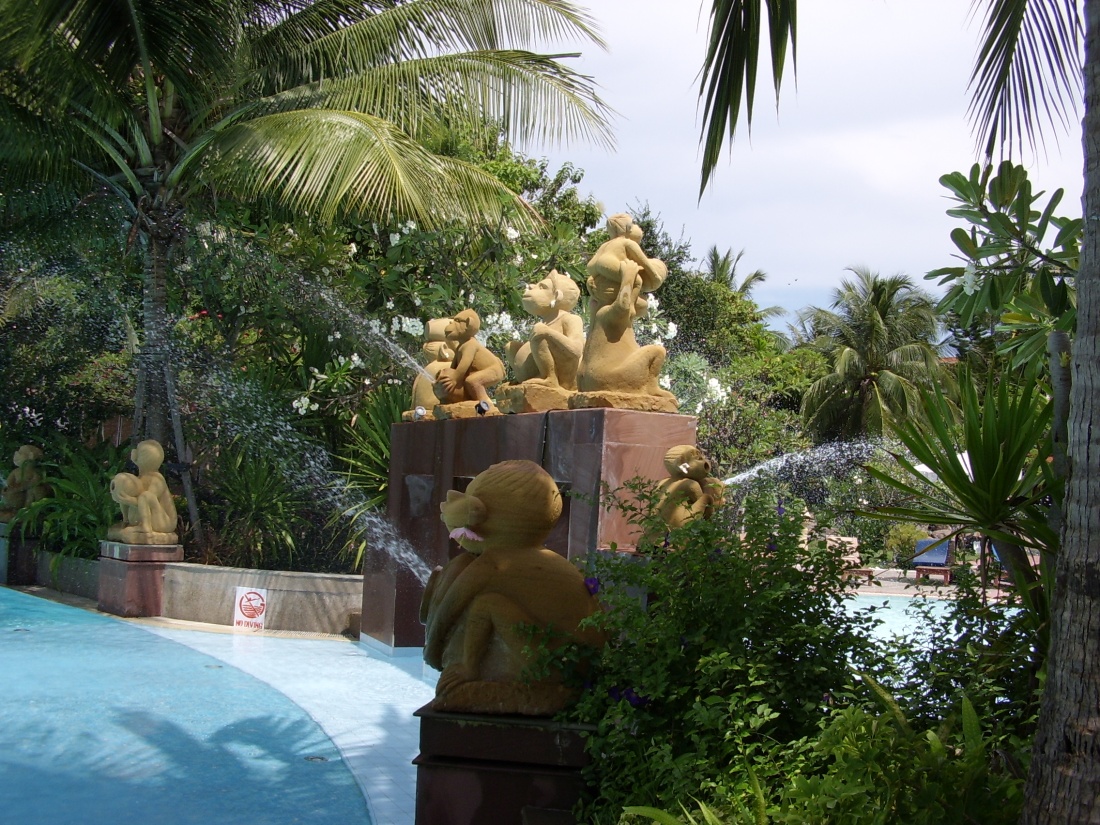 I loved this pool.  It had a resident frog who lived in the vegetation down at the far end, who serenaded us every day.  And every day, I offered to kiss him and turn him into a prince.  But he always told me to **** off and leave him alone. He was thoroughly fed up with being patronised by women who thought they could improve upon his chosen lifestyle! So, I won’t try that again.