6th June 2006 – Bangkok in all its glory and chaos
My first guided tour started at 9 a.m. We were visiting the Grand Palace and the Temple of the Emerald Buddha (Wat Phra Kaew).

This year, I’m pleased to say, was the start of my use of digital photography so I haven’t had to search for holiday snaps amongst my boxes of photographs.  They are all neatly stored in folders on a hard drive.

The palace and temple area was absolutely amazing, with seemingly dozens of buildings covered in gold and patterned with statues and shrines. We were able to enter the temple to see the Emerald Buddha. The statue of the Buddha itself is carved from a single piece of dark green jade (not emerald) and this temple is regarded as the holiest Buddhist temple in Thailand.  We were also allowed to visit parts of the Grand Palace. However, although the king no longer lives there, it is still used for ceremonial occasions and preparations for the King’s 60th anniversary were in full swing and there were many places we weren’t allowed to visit. I’m going to let the photos speak for themselves. 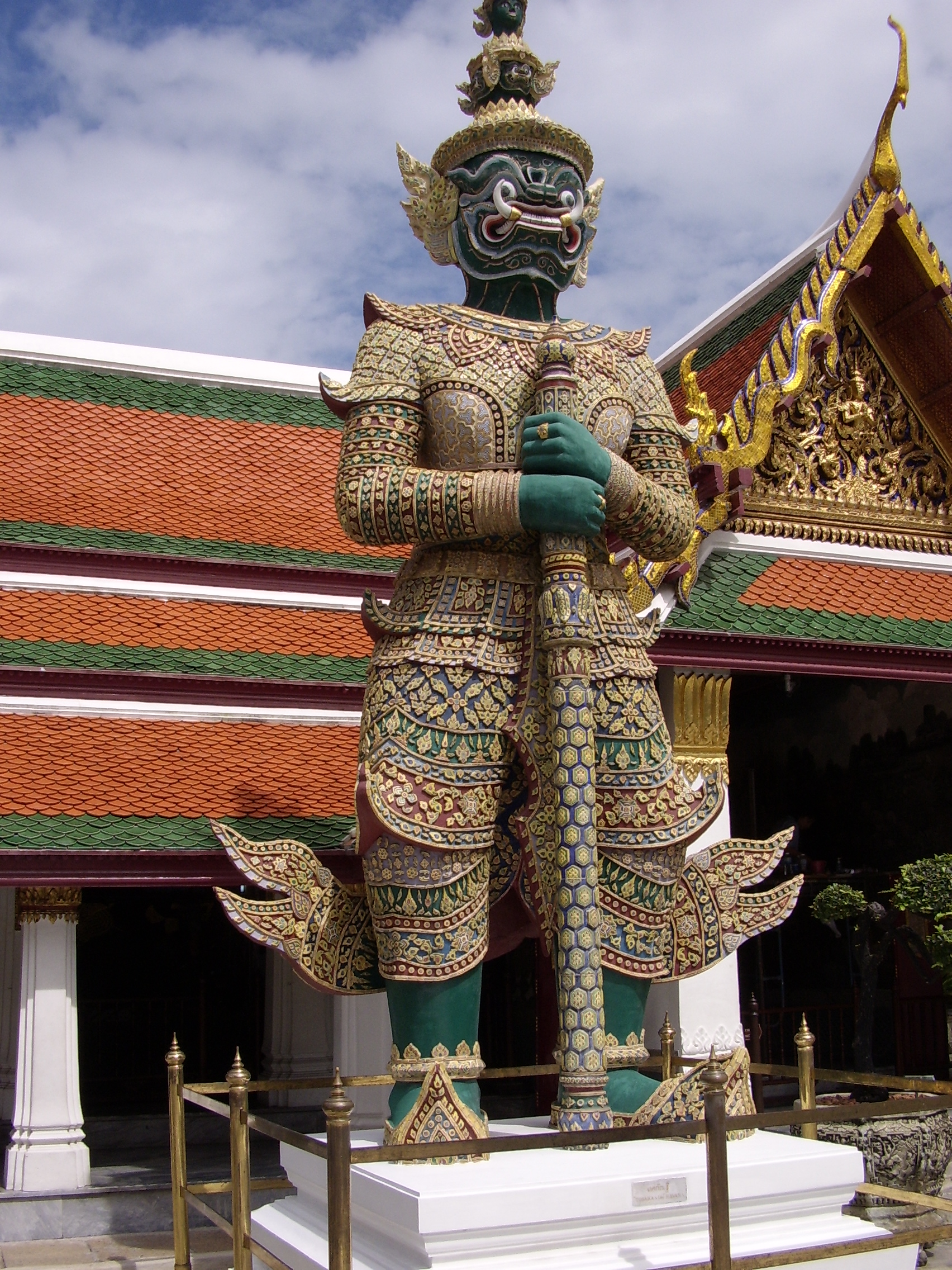 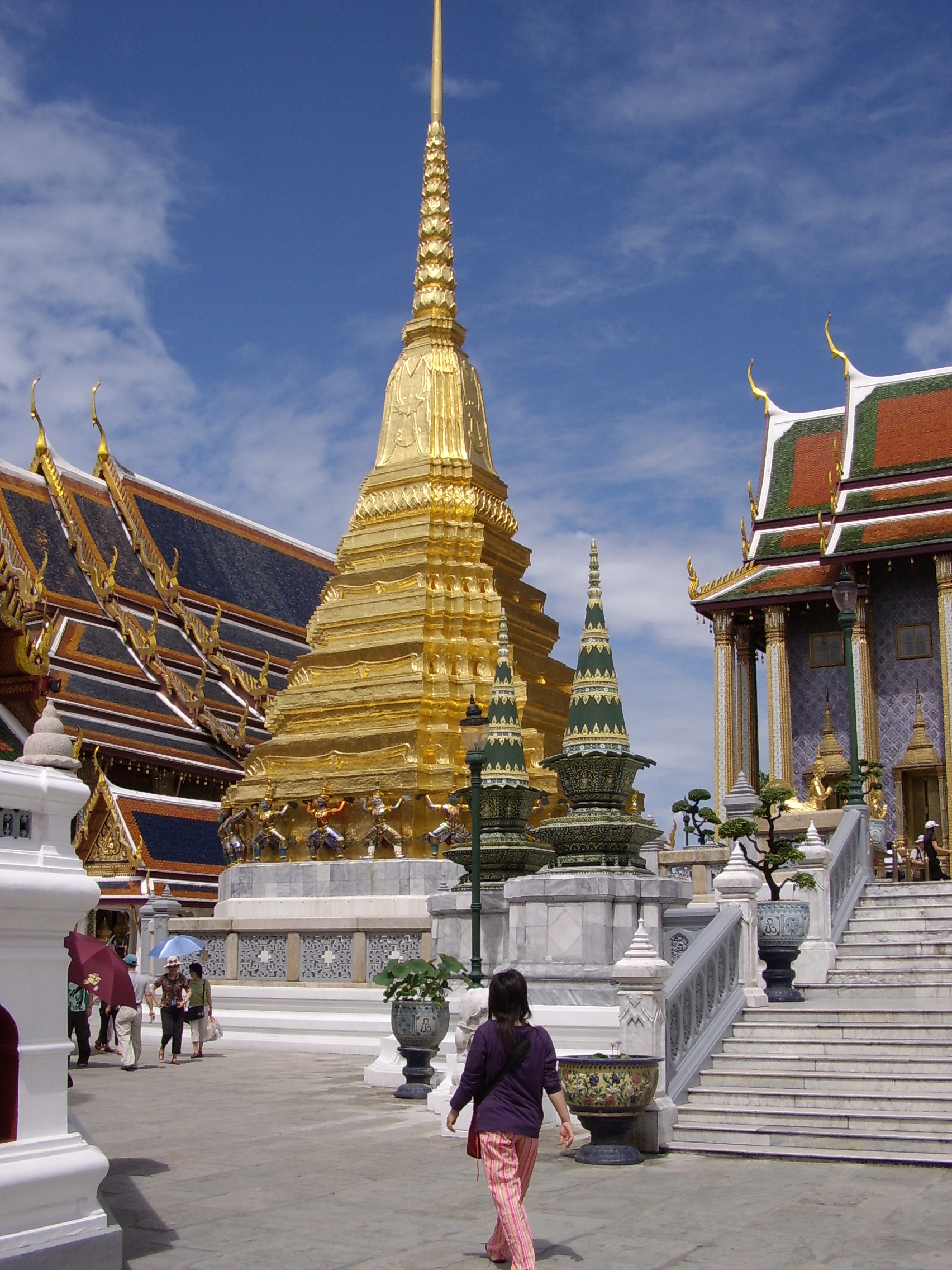 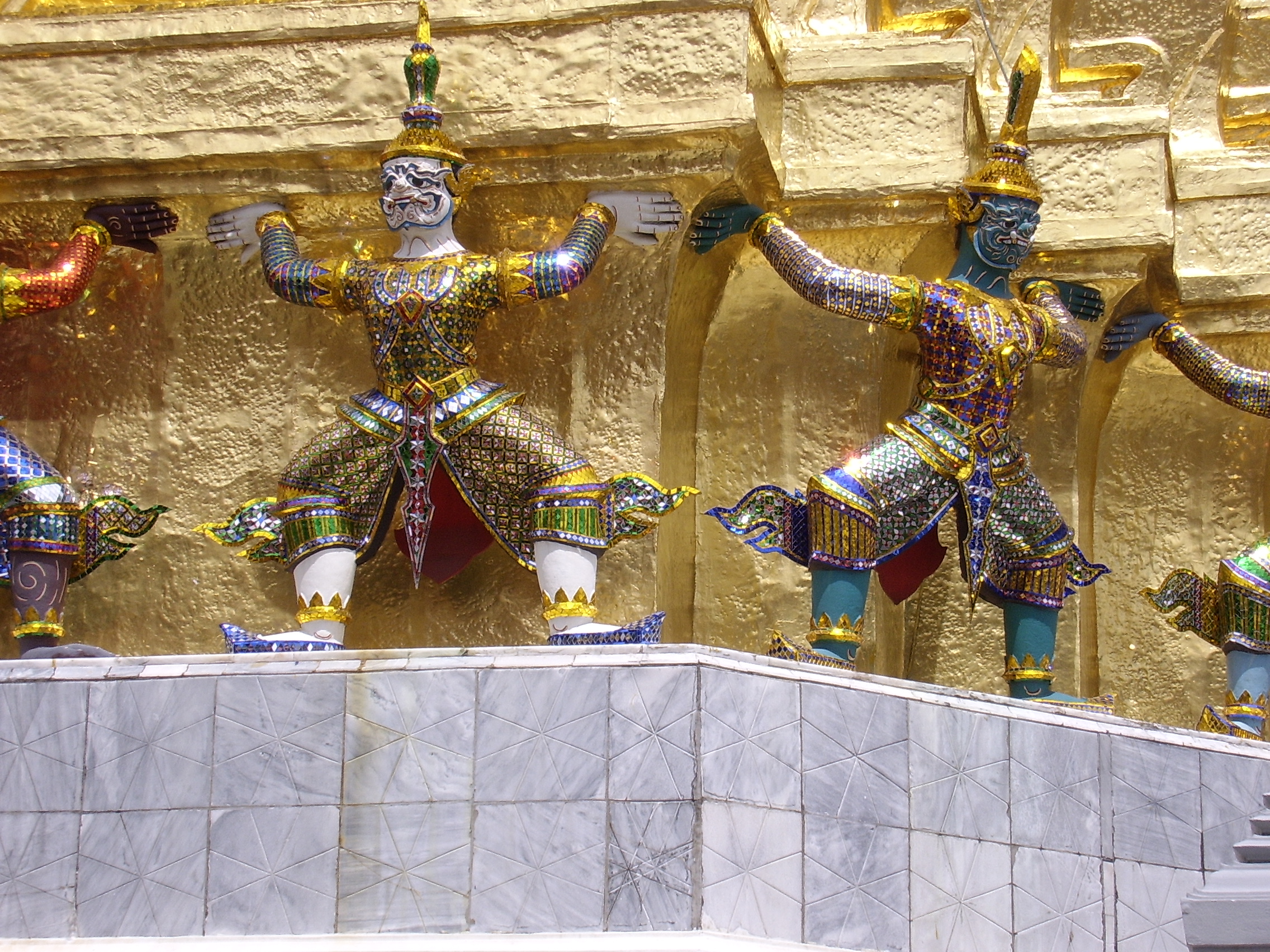 It was so hot that it was a bit of a relief to get back on the bus!  Our next visit was to the Royal Lapidary where we were shown how gemstones develop and how they are collected and made into jewellery. Of course it was also a purchasing opportunity and I bought a beautiful amethyst ring which I have since sadly lost.

I restricted myself to a light lunch in anticipation of a swim to cool down but then it proceeded to pour with rain all afternoon so I fell asleep instead.

It was still raining when we left for an evening soiree on the river. Thanks to the preparations for the King’s anniversary celebrations going on throughout the town, we had a nightmare journey.  The whole of Bangkok seemed to have ground to a halt and it took us almost an hour and a half to do our journey, much of which time was spent just standing still. At one point our guide jumped out of the taxi and ran to the riverside to make sure that the boat didn’t leave without us! When we arrived, thank goodness, it had stopped raining. The boat left straight away and we enjoyed a gin fizz and a three-course buffet and afterwards we sat on deck to enjoy the calm and warm evening while we travelled up and down the river. Yet again part of the river was closed for rehearsals for the celebrations.

It had been a short but enjoyable introduction to Bangkok but I was looking forward to arriving at my next stop where I was to spend my three weeks for the price of two.  What was in store at Cha-Am?