September 24th 2004 Maine – New Hampshire
Today we set off inland, crossing to New Hampshire. Again, we drove through some spectacular scenery. The leaves are beginning to turn in ever larger numbers. Still, when we stopped for breaks, the sun was shining, and the temperature was in the mid 20sC. We drove through the morning and most of the afternoon with only a brief stop for lunch.

When we arrived at our hotel in Shelburne we set off straight away for the nearby Wildcat Mountain. We went up the 4,000 ft mountain in the cable cars of the Wildcat Express. The view from the summit was certainly worth the trip and it was surprisingly warm. We returned from the mountain and I had time for a swim in the hotel’s pool (also surprisingly warm). It was good to have a stretch after all the time cooped up in the coach. My mobile had a signal for the first time in days and there was just time for a call home. Edna and Mary invited me to join them for dinner at the hotel, which was surprisingly good – and reasonable. Less exciting was the “entertainer”, a singer/DJ, who walked around the bar serenading individual members of the audience. We didn’t stay long!

September 25th 2004 – New Hampshire – Vermont
This was another day of driving through spectacular scenery. But first, not so far from Shelburne, we stopped at the beautiful covered bridge at Jackson. I was longing to see one of these, after being rather carried away by the sensual and heart-breaking “Bridges of Madison County” starring Meryl Streep and Clint Eastwood.  (It’s the sort of role which Meryl does so well, which is why I can’t bear to see her in “Mama Mia”).  At the bridge, a lady from Texas asked me if Mr Le and I were “going steady” yet.  It rather spoilt my reverie. 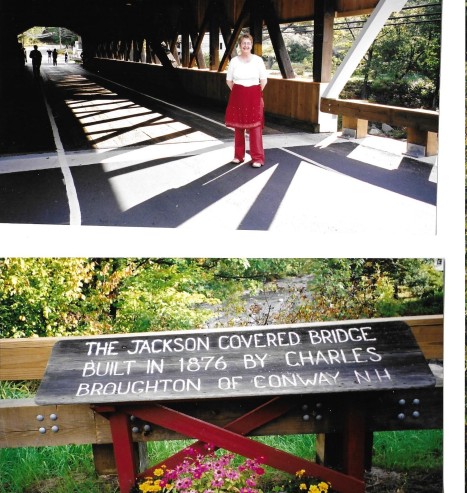 We then drove westwards to Montpelier, the state capital of Vermont, where we would have lunch. On the way we stopped to look wherever the trees were definitely on the turn. Everywhere was a mixture of green and various shades of gold and red.

In the afternoon, we stopped at a Maple Syrup farm, where we were given a talk about the collection of sap and the manufacture of the syrup. The main draw though was the shop, where our tour manager treated us all to a maple flavoured ice-cream and we all spent happily. Then on for a short visit to Stowe before reaching our motel in Morristown. Barbara, our tour manager, had warned us that the motel was “basic” and it did only have one giant bed so, perhaps, that is the definition of “basic”. As we got closer to Moretown, the clouds came over and it eventually rained heavily. This did bring the temperature down to a pleasant level, as it had become very humid and uncomfortable as the day wore on. I had dinner in the restaurant next door and an early night ready for an early start tomorrow.